Cinco de Mayo: a Celebration, or a Commemoration?

With Cinco de Mayo around the corner, I thought about sharing some of my thoughts regarding this important date to help create cultural awareness.

First, I hope that many of you already know that Cinco de Mayo is NOT Mexico's Independence Day. That one is celebrated on September 16th.

Second, NOT all Latinos are Mexican. Remember, do not say "Happy Cinco de Mayo" to all of your friends who speak Spanish. There are other countries besides Mexico where people speak Spanish too. But better yet, why not just try to avoid saying those words?

Cinco de Mayo is a date that is commemorated in Mexico. It was a day when a group of farmers decided to fight back the much larger and experienced French army close to the city of Puebla, Mexico in 1862. And they won, the small group of Mexican farmers won the battle... but not the war. For this reason, Cinco de Mayo is called "El Día de la Batalla de Puebla" (The Day of the Battle of Puebla) .  The commemorations involve civic military parades, enactments of the battle, and sometimes, students of middle school and high school get to participate in those parades too.

I believe it's important to respect an important date in history, especially when that date is an important part of other country's history. To me, it's very unfortunate to see some brands in the U.S. using marketing materials around this date that mock the Mexican culture with the desire to attract business so, allow me to give you a tip. You do not need to use the "sombreros" or "sarapes" to make your ad look more Mexican. Look at this example of what I think was a smart way to promote Cinco de Mayo without the mocking. 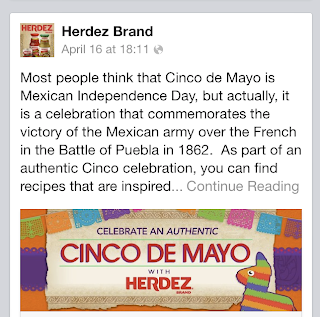 I know that the parties will not stop, but I would love to see some changes on the approach that brands have when it comes to Cinco de Mayo because, I do love to see people interested and embracing my culture, I just don't accept brands making fun of it only because they are lazy to do the research.
Labels: Blog Brands Cinco de Mayo Culture Heritage Hispanic History Latino LATISM Marketing Mexican Multicultural Social Media