I still have the memories in my mind of the 1st Seattle Latino Film Festival. It's as if it were yesterday. In 2009 I met one of the co-founders of this festival, filmmaker Lonnie Tristan Renteria who talked me into becoming a volunteer to help the Festival become one of the most important displays of high quality Latino films. It was honestly one of the most wonderful experiences of my life!

For three years it was a three-day festival, but this year it has been extended to ten days! Imagine my surprise and happiness when I learned about the opportunity of seeing some of the best movies produced by Latino filmmakers here in my city.

After that first year, it became very difficult to keep participating as a volunteer and work also made it almost impossible for me to attend all the screenings. But, this year would be different, I said to myself, this year I really had to try to make it.

On Sunday, I decided to take my little seven-year old granddaughter to what looked like a fun movie for kids: "El Secreto del Medallón de Jade." I thought it could be a very neat experience for her to see movies in Spanish at the movie theater. She loved it! 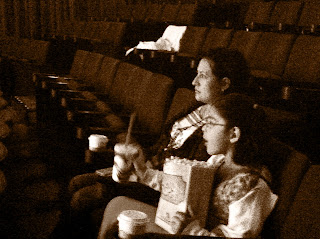 After the screening, I had the pleasant surprise of seeing the co-founder, executive and programing director of the Seattle Latino Film Festival, Cuban writer Jorge Enrique Gonzalez Pacheco. We started talking about how everything started and how difficult it has been to keep the festival going but that he wouldn't surrender because it's something that Seattle needs to have, and I absolutely agree. In the three years of the Festival's existence, the films that I have had the opportunity to see are not only of a great quality they also have great content

After seeing "El Secreto del Medallón de Jade," I saw the movie "Cápsulas." The film was written, produced, and directed by Veronica Riedel who happens to be the first woman to direct a film in Guatemala.

Here is a preview of it:

Later that night, I saw "Salsa Tel Aviv." A Latino film produced in Israel that talks about immigration, the sacrifice of a mother, and my favorite subject: salsa dancing!

Here is a preview of this film:

On Monday night the film of my choice was "Urte Berri On, Amona / Happy Birthday Grandma."  A Spanish production that started as a comedy to later turn into a thriller. How's that for interesting movies uh? I shouldn't be surprised though, the Latino humor can be quite different from the American humor. If you are curious about it, here is a preview of such movie:

There are still a few more days of Latino movies ahead before the festival closes this year. If you are curious about a particular movie let me know, it would make me very happy to share this experience with you my friends!

For a list of all the films and schedules go to: Seattle Latino Film Festival